Meet Ian and Julia, who moved to the Algarve in Portugal with their dog, Alfred, in search of a better work-life balance. Here, they give their insights into the resources that helped them make the move and what they have loved and learned along the way. 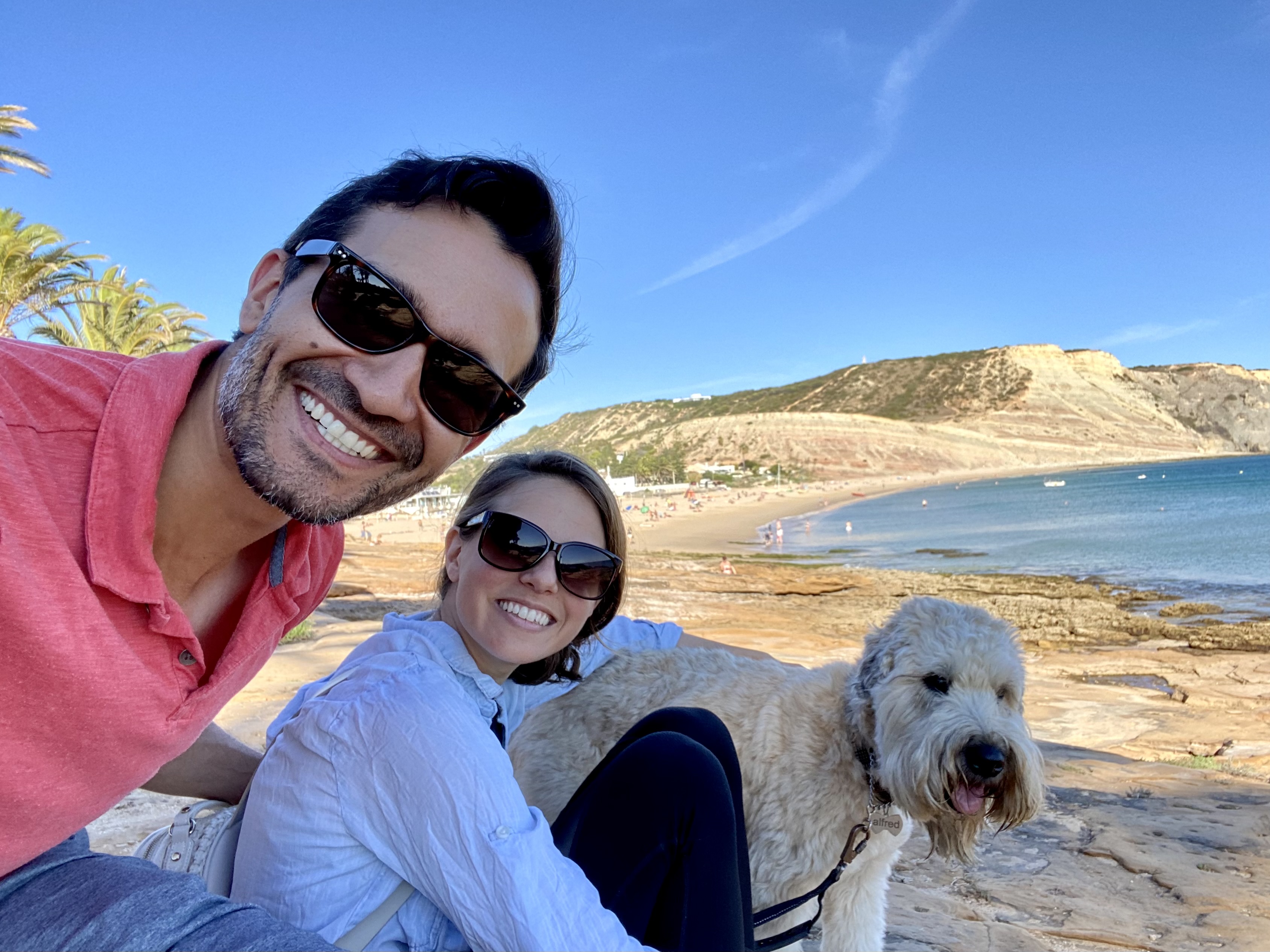 Ian and Julia are from the US midwest. They met at university and have been together for 14 years.  Both enjoyed successful professional lives in the US, and despite dreaming of living in another country, they figured a move would be in 30 or 40 years time when they retired. But during Covid, they decided to accelerate their plans radically and chose to move to Portugal, looking for a better work-life balance.

Both Ian and Julia recognized that life was great in the US, but that there was something missing.  They weren’t fulfilled, despite their successful careers, and had been wondering if life could be better in another country.

They visited Portugal twice before deciding to move there. And it really opened their eyes, as they met kind and happy people. They discovered a culture with amazing customs, a sense of fun, interesting food, and a really diverse landscape, despite being a small country.

During Covid, seeing so many people’s lives impacted, and being afforded a little down time, they decided the move was actually something they could do now, rather than waiting.  Here’s how they did it.
‍

Deciding to move to Portugal

Portugal was one of a few countries Ian and Julia considered, alongside Mexico and Spain. They had visited Mexico and loved it, but safety considerations were a concern.

“Portugal just sort of captured our hearts”, said Ian. “We had such high expectations it was the only country that we visited that really just blew our expectations out of the water. The people, the kindness, the reciprocity that came through on our visits wowed us and Portugal flew to the top of our list.”

Ian and Julia did an extensive amount of research, and as self-confessed planners, once they were committed to making the move, they set up excel spreadsheets and timelines and so on.  But the process as a whole took nearly a year, especially as it was in the midst of the pandemic, so everything was a little slower.

Initially they did an online course with “Our Rich Journey”, which focused on moving to Portugal and found that to be a good foundation. They also read a book called “The Portuguese” by Barry Hatton, which lays out some of the frustrations people come across in moving to Portugal, and explains why certain cultural behaviors or slower processes exist.

Then, they started finding the companies that could help them to make the move.  Bordr, was one of those companies. “Working with Bordr to get our NIFs and bank accounts set up, really catapulted us into the next stage.” said Ian.

They also got into a lot of community groups like Expacity, joined Facebook groups, and found some great people and resources to help them create their specific timeline.
‍

Finding a place to live in Portugal

Finding a place to live was the hardest part of making the move to Portugal. It’s a requirement of the D7 visa, and as Ian and Julia were mid-pandemic, they weren’t able to visit and see places physically.  There was a lot of trust involved, working with people in Portugal to help them see places virtually. They made some connections with long-term rental companies, that were able to set them up and were fortunate to find a place the've been happy with.

Moving with a dog to Portugal

Bringing a dog to a new country was one of the most stressful things for the couple as they planned their move.  Julia recalls, “There was a lot of work to see what the process was and what requirements there are to move a dog to Portugal.  Fortunately, there’s no quarantine here for animals, and that was definitely a deciding factor in our decision to move here. We just wouldn’t be able to leave Alfred in quarantine. The entry requirements are fairly straightforward, just make sure you have the requisite vaccinations.  We had a vet in the US who completed his EU pet passport so that he would be ready for travel.”
‍

Learning to live in a new culture

Julia pointed out that there are a lot of small unexpected adaptations to make when you move to a new country:  “For me initially, the grocery store was a huge stress. I was in such a routine and habit of buying everything in one big shop, and I had to learn that in some of the smaller areas, it’s very typical to go to the grocery store every other day.  People rarely roll into a store with a huge shopping cart!”
‍

The couple live on the southern coast right now, but in their first two trips, they explored the cities - Porto, Lisbon and Coimbra - and the Algarve. They’re currently in Lagos in the Algarve, which they have loved as a home base. Ian says, “It’s been a soft transition, because there’s a lot of expat influence here. Now that we’ve been in Portugal a little while, we’re planning to move up north to the Coimbra region, where we can immerse ourselves more in the Portuguese culture.”
‍

How does life compare in Portugal to your previous life in the USA?

“The pace of life and priorities are different.  I was living a pressured corporate life, in which success was linked to your position, your influence and your earnings, and I knew that in the long-term that wasn’t going to serve me well.  Portugal really flips that mindset on its head.” say Ian.

"Everyone gets two to three hours in the middle of the day to just take a break, enjoy the outdoors, enjoy lunch and a coffee.  People focus on each other and family, rather than on the race.  Life is a jog, rather than a sprint!"

Speaking of the difference in mindsets between the US and Portugal, Ian said, “We grew up in the midwest and there were tornado siren drills once a week and you would hear it and think about that situation each time.  But here, in Portugal, we went to one city in which there’s a lunch siren!  We kind of joked about it, but honestly, if you’re going to get a city-wide notification of something, how lovely is it that it’s a notification to relax for a couple of hours!”
‍

The people were one of the biggest factors that sealed the deal for Ian and Julia, because in Portugal, they found the people to be incredibly kind and have a great sense of humor.  They’re now learning Portuguese, but when they first visited, they weren’t.  They recall fondly that the people they met often accommodated them by switching to English, which helped them a lot, and a lot of people have a good level of English in the Algarve.

Julia recalls, “My highlight of moving to Portugal is the day I set out to practice speaking Portuguese to somebody.  I picked a coffee shop. I sat down and a couple were looking for a table.  I had the shade from an umbrella and I could see they were a little older, so I offered them my place. We ended up having a conversation and they were very patient with my horrible Portuguese.  Ian came and joined us later and we ended up really sparking a beautiful friendship. We went to get lunch and dinner with them and we even spent our first Christmas abroad with them.  By far and away, that has probably been the highlight of our experience so far - being able to make friends with just an amazingly kind Portuguese couple that have taken us in like family.”
‍

Ian and Julia's top tips for relocating to Portugal

Plans for the future

Ian and Julia just got their residency, so they are looking forward to the next five years really settling into the Portuguese way of life. They plan to eventually be able to move back and forth between Portugal and the US, so they can be available for their parents.  Long-term, they’re really looking forward to Portugal becoming their home. 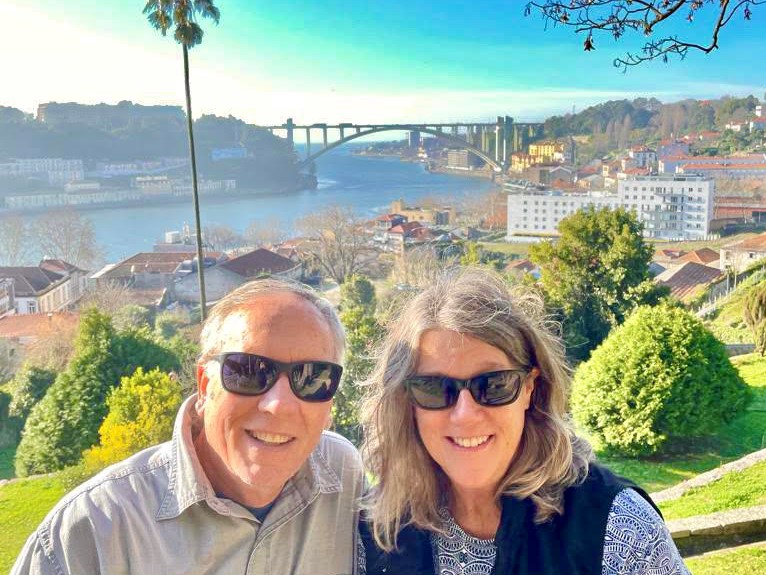 Moving to Portugal having never visited before!